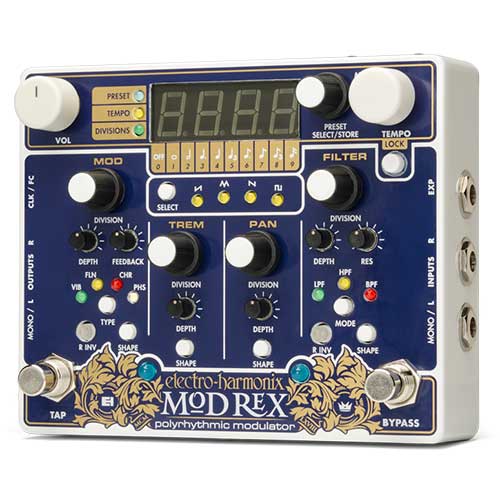 Electro Harmonix Mod Rex is a kinetic tour-de-force that lets you weave compelling, shifting, musical tapestries. Whether you are a guitarist, synthesist or electronic musician you will find it inspires your creativity and stretches your musical boundaries.

The heart of the pedal are its four, independent modulation sections synced in time, they are:

MOD features great sounding EHX Vibrato, Flanger, Chorus or Phaser. The Depth knob lets you set the amount of the effect while Feedback controls the resonance of the Flanger and Phaser.

TREM delivers tremolo, an effect that modulates the volume of your signal. The Depth control sets tremolo intensity.

PAN modulates between left and right in stereo operation. In mono operation the PAN section acts as another tremolo section, but with the wave shapes all inverted!

Each section also features a choice of four LFO shape options: rising sawtooth, triangle, falling sawtooth or square wave. They affect the way the modulation transitions and provide advanced creative control over the specific section as well as the way they interact with each other.