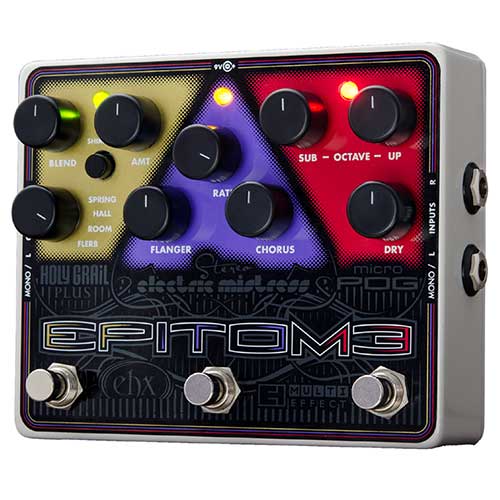 The effects on the Epitome can function independently, together, or can interact with each other in a unique manner by engaging SHIMMER mode. The three separate footswitches, one for each section, allow for individual control over which effect is on or off. Each effect has its own dedicated knobs and switches, all of which are tweakable at any moment; there are no menus or hidden settings to scroll through.

Shimmer mode reroutes the Epitome’s effects in a way that would not be possible with the three separate effects pedals. In Shimmer mode, the octaves from the Micro POG are separated from the Dry signal allowing the Holy Grail Plus to only reverberate the octaves. Additionally, Flerb mode in the Holy Grail Plus changes to an echo effect, where the Micro POG is placed in the feedback path of the delay to create echoes that change octaves with each repeat.

Using the Epitome is like having three separate effects pedals on your pedalboard, without the need for additional cables or separate power supplies, all in the footprint of one medium sized pedal.

Be the first to review “Electro Harmonix Epitome” Cancel reply