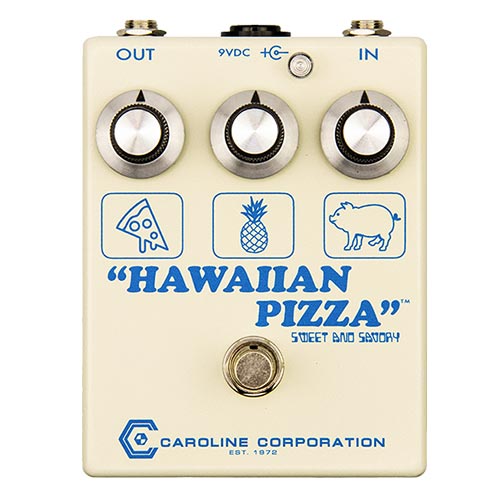 Caroline Guitar Company Hawaiian Pizza is a limited edition fuzz pedal co-designed with John Snyder (EAE) and based on a classic fuzz-drive.

First off, the three highly interactive controls create a whole lot of sonic range. It’s still simple and immediate to use, and reveals more and more versatility in its scope as you turn the knobs. It can do treble booster, crunchy amp-like drives, full-on fuzz, and even some broken gated stuff.

While capable of that searing silicon transistor sound, it can be incredibly sweet, singing, and smooth at higher gains by backing down the voltage (pineapple) control. It also features an internal “fake guitar pickup” so its performance is not affected by feeds from buffers or wireless units like other similar pedals of this type would be.